The Sainte-Foy Festival at Conques (Aveyron)

From the pilgrimage from Sénergues to Conques, from the procession of the relic through the streets of the village to the evensong 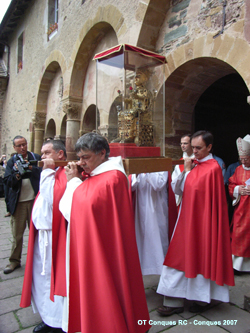 followed by dancing to the sound of the cabrette bagpipe, this is a big weekend for pilgrims to get together.

Saturday : procession in the village at night, with torches and celebration

Sunday : solemn celebration and religious service, starting with a procession in the cloister around the Majesty of Sainte Foy (9th century reliquary-statue) at 10:30am, mass and festivities, vespers.

2013 marked the 1000 years celebration of the writing of the Book of Miracles of St-Faith, by Bernard of Angers (in Conques around the year 1013).

Each year, a procession in period costume, which is both a historical reconstitution and religious act, passes through the village streets to glorify Saint Fleuret (patron saint of Estaing). The extras, the Estagnols, in period costume represent characters from the church , the heavens and the earth alongside the olden day Compostelle pilgrims in their monk’s robe covered with shells.

Not to be missed! The church of Saint-Côme d'Olt houses a reliquary containing a fragment of Christ’s crown of thorns that gives rise to a procession held each year on the second Sunday in July. All the village’s inhabitants, in period costume, re-enact the main phases of the crucifixion of Christ. The festival lasts the whole weekend with a traditional dance, meal and fireworks.